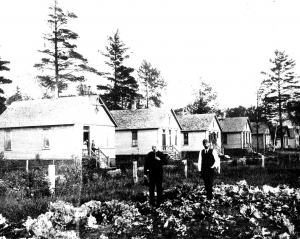 According to The Whiting Sun’s October 25, 1907 edition, “In the dim ages of the past, long before the white man invaded the sandy shores of Lake Michigan, the site of what is now the city of Whiting was a favorite hunting and fishing ground of the Illini tribe of Indians. The swamps and sloughs, great producers of wild rice and aquatic roots, were the feeding ground of innumerable wild ducks and geese and the migratory wild pigeons that darkened the sky in their annual flight. The treacherous lake, Michigan, teeming with fish, tempted Indians to risk their lives in frail bark canoes. Fierce battles were fought when some predatory tribe presumed to trespass on the preserves of the warlike Illini and the placid waters of the sloughs were dyed red with the blood of the contending warriors.” “The territory of Indiana was organized on May 7, 1800, and admitted as a state in December, 1816. Lake County was purchased from the Indians by the state in 1832, and laid out into townships in 1834. Until the advent of the railroads, the swamps of the northwest corner of Indiana were a wilderness, unbroken except for an occasional hunting and fishing party.” According to a book titled, The Calumet Region c1959, “Travel by any mode of transportation was difficult in this area. The early settlers found it comparatively easy to walk or drive ox teams along the ridges but it was quite a different matter to get over to some other ridge.”

The Advance of the Railroad

The Calumet Region c1959 states “The Michigan Southern Railroad was built across this wilderness in 1851 and entered Chicago the next year. In 1858, the Pittsburgh, Fort Wayne,

and Chicago railroads, built its tracks parallel to the route of the Michigan Southern to reach Chicago. The advent of the railroads and the low prices asked by the state for the swamp lands attracted shrewd investors and speculators to the region. George M. Roberts was the first to acquire land in the Whiting area, his purchases from 1851 to 1858 amounting to 471 acres.” When the Pennsylvania Railroad built a station on George Roberts’ property it was given the name Robertsdale. The railroads also brought with them immigrants, first settlers to the region, a majority of whom were of German descent. One of these immigrants was Henry Reese who worked, like several immigrants, on the construction of the railroads. An 1880 Census lists that Whiting had a population of 150 people.

The Schrages “First Family of Whiting” 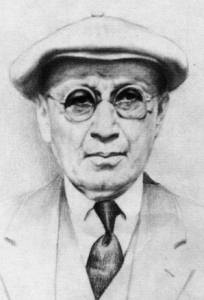 According to, The Calumet Region  c1959, “Some time in the 1840s, Christof Schrage brought his family from Germany to Chicago.” In 1854 Christof, a merchant, bought land in the area which would be known as Whiting and brought his family to these swampy lands. Christof’s son, Henry Schrage, joined the Union Army where he fought alongside Sherman on the “March to the Sea.” After the Civil War Henry came back to Whiting and worked on the railroads making $1.10 a day. In 1868 Henry Schrage was married to Caroline Wuestenfeldt. That same year he opened Whiting’s first store, which his wife ran, selling precious commodities to the early settlers. The store was located near the Lake Shore and Michigan Southern Station. In 1871 Whiting’s first post office was opened and Henry became the postmaster until 1892 when his son Henry, Jr. took over. Fourteen years later, Henry Schrage opened Whiting’s first financial institution, The Bank of Whiting. When Standard Oil decided to construct a refinery in Whiting, they had to buy fifty acres which was on Schrage property.